When Michele Bazzanella asked me to collaborate in the recording of the new EP by Andrea Bolner and Sentomatic, I immediately played the ace I had up my sleeve. Why – I suggested – don’t we do everything ourselves with an Apollo Twin and just two mics? On the plus side, we won’t have to pay for a recording studio, so that we can work with no rush until everyone is satisfied with the results. Furthermore, by cutting the possibilities to intervene during editing and mixing from the start, we’ll have to take thoughtful and effective choices already during tracking in order to obtain the right sound.

On a sunny Sunday in August, Gianluca Bernardis set up his drum set in a recently refurbished room in a music school in Trento. Using provisional backing tracks that Michele, Sentomatic’s producer and bass player as well as my associate in this effort, had carefully prepared, we moved forward recording the five songs in the set list. Michele and I prepared a basic miking setup, just as planned: (a) a dynamic mic placed approximately at the same height as the snare and facing an imaginary point between the snare and the kick drum; (b) a condenser mic to record some ambient and to allow for the spatialization of the drums, otherwise monophonic. 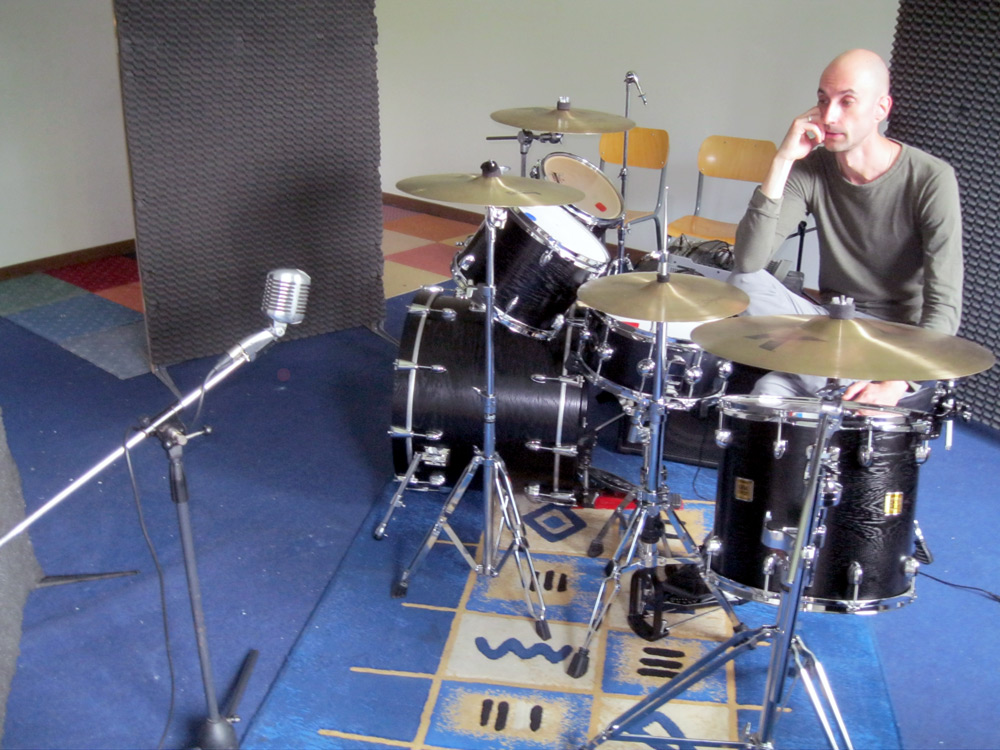 While the choice of this approach stems from the willingness to take the most important decisions during tracking rather than postponing them to editing and mixing, the inspiration derives from an article, published on Sound on Sound, about the soul and funk Brooklyn-based label Daptone Records:

At Daptone studios, sound engineer, musician and label co-founder Gabriel Roth (Bosco Mann) oversaw the recording of many astonishing albeit niche artists, such as Sharon Jones & The Dap-Kings, Charles Bradley, The Budos Band, Sugarman Three and Antibalas, together with some indubitably more famous artists, most notably Amy Winehouse. In the abovementioned article, a paragraph especially stroke me, in which Roth, speaking about the Back to Black sessions, candidly claims that it does not make sense to fragment the sound of a drum set only to have to artificially reassemble it at a later stage:

“People work so hard to get their drums to sound like they were recorded with one microphone. We just put one microphone out there. I’d rather spend two weeks looking for the right place to put the one microphone than on setting up two dozen mics and trying to balance them.”

According to his point of view, the magic of a performance is given by the musicians’ sound and interplay on stage or in the recording room, an art that who was born in the era of DAWs and home recording, of infinite tracks and MIDI quantizing, has hardly had the opportunity or the patience to experience. It is not by chance that the distinctiveness of Daptone Records is that it has set the clock back to a particular historical period, of which by the way I am especially fond. I need to say it already: I hold Daptone’s artists, their music and even their worldview in great esteem. I also admire Roth’s approach, which aims at recreating the sound of funk and soul recordings from the late ’60s. In this search, he adopts “historically authentic” procedures and instruments, from analog tape to miking techniques.
Nonetheless, the outcome is not necessarily a mirror of the past: someone might remember Pierre Menard, Jorge Luis Borges’ fictional character who was determined to rewrite Don Quijote word by word; ironically, Menard’s Quijote, according to a wise critic (or a clever huckster?) differed from Cervantes’ only for the different zeitgeist that characterizes the two works, otherwise identical. However, Daptone is not a mere reflection of the past as their music is clearly a child of their time, not only when it interacts with Mark Ronson’s hip-hop aesthetics but also when Sharon Jones sings: “They’re building bombs / While our schools are falling / Tell me what in the hell we’re paying taxes for…” or when Charles Bradley tells about the enduring contradictions of the US in “Why Is It So Hard”.
The quality of Daptone’s recording, at least for a funk and soul aficionado, is transparent in any of the above-mentioned artists, while a significantly larger audience has learned of the label thanks to Mark Ronson’s choice to use their studios and house band, the Dap-Kings, to record hits such as “Rehab” and “You Know I’m No Good” from Amy Winehouse’s Back to Black. In particular, several tracks, including the drums, have been recorded at Daptone’s Brooklyn studios under Gabe Roth’s supervision.

Although we were about to record one instrument at a time, we nonetheless followed Roth’s miking procedure almost by the book as a reasonable way to stay faithful to Gianluca’s sound. Quoting, once again, Roth:

“The sound you want really is coming from the musicians.”

According to this formula, we took a Shure 55SH, kindly loaned from our rockabilly friend Marco Pisoni, and, as said, we placed it roughly at snare height, pointing between the kick and the snare. This dynamic mic, the same that Roth apparently used, is also known as Elvis microphone and has a rather large diaphragm that, among other things, provides a decent low-frequency response (at least compared to an SM58, which we also tried and quickly discarded).

After a few attempts we managed to place the mic satisfactorily, obtaining a sound perhaps not very rich harmonically and rather flat dynamically (having a single recording source, in addition placed at a medium height, penalized the cymbals that were further off, while compressing the softer and further sounds more as compared to the louder and closer ones), yet in a way more faithful to the drummer’s own sound. But, what is my understanding of faithfulness? I emphasize the ethics and aesthetics of the concept: a genuine sound, without any frills, able to place Gianluca’s drumming on the forefront while avoiding too much mediation and providing that vintage touch that we like so much. Furthermore, this method allows the drummer to monitor through the earphones more or less what will end up in the final recording. Finally, a single mic is a setting that possibly simulates better than other settings the situation of someone listening to a garage band performing live in a rehearsal room, where after all drums spatialization is negligible. In short, we decided to take the most crucial artistic decisions right there and then rather than procrastinate them to the following stages of production at the cost of squeezing a bit the drum sound. 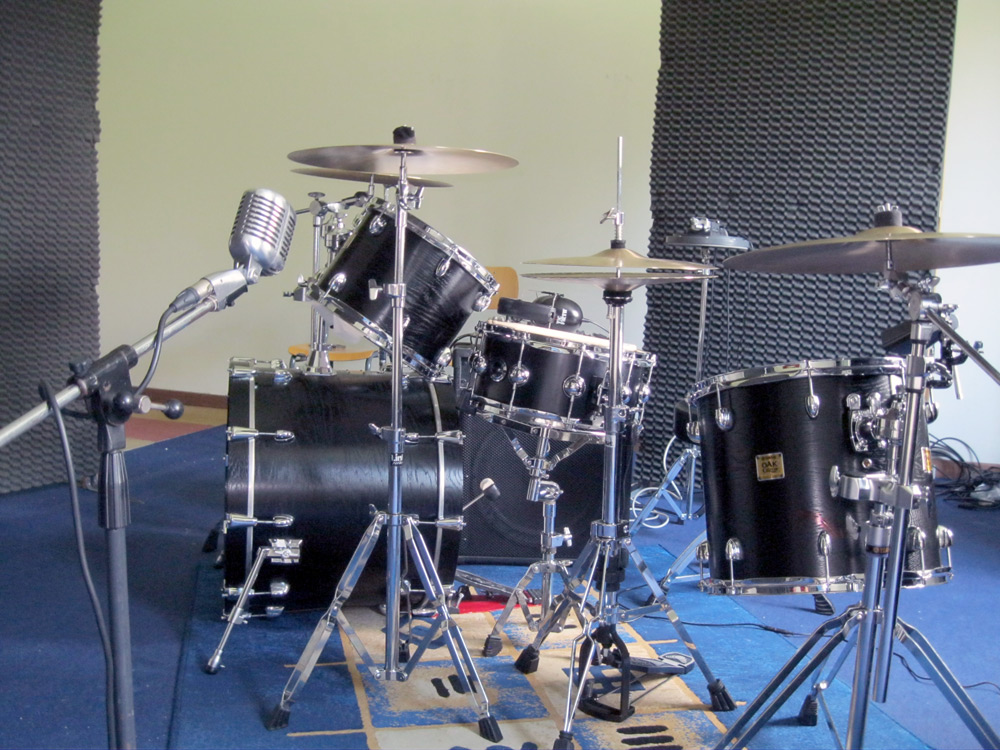 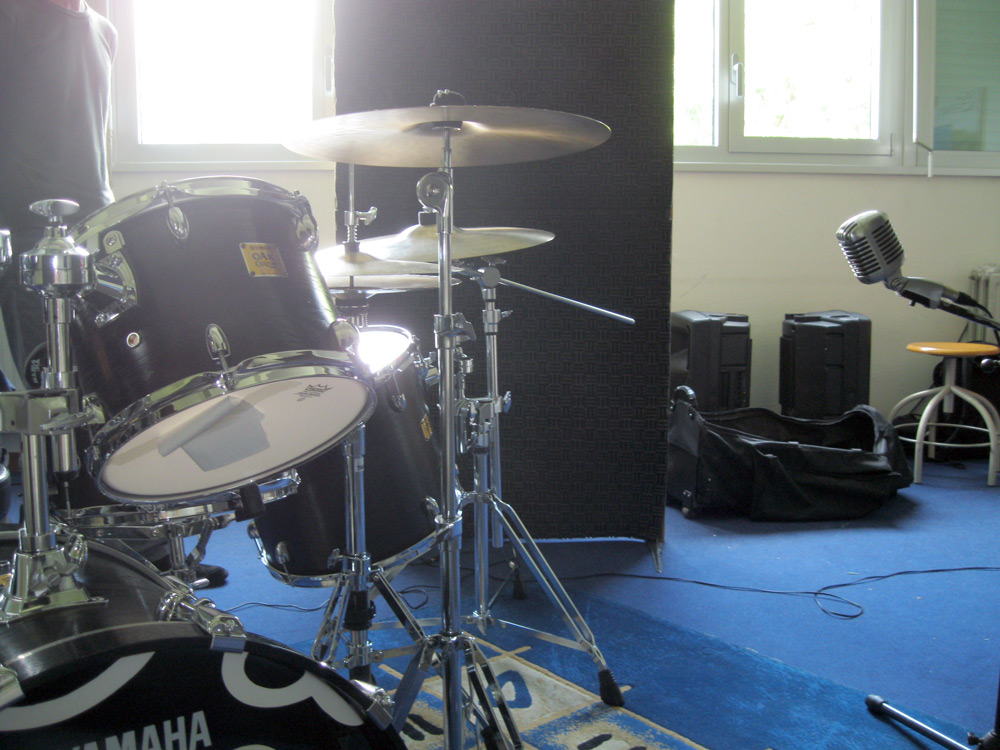 Since it’s better to be safe than sorry, we still placed an additional mic, an AKG 414, roughly five meters from the drum set and 60 degrees on Gianluca’s right. 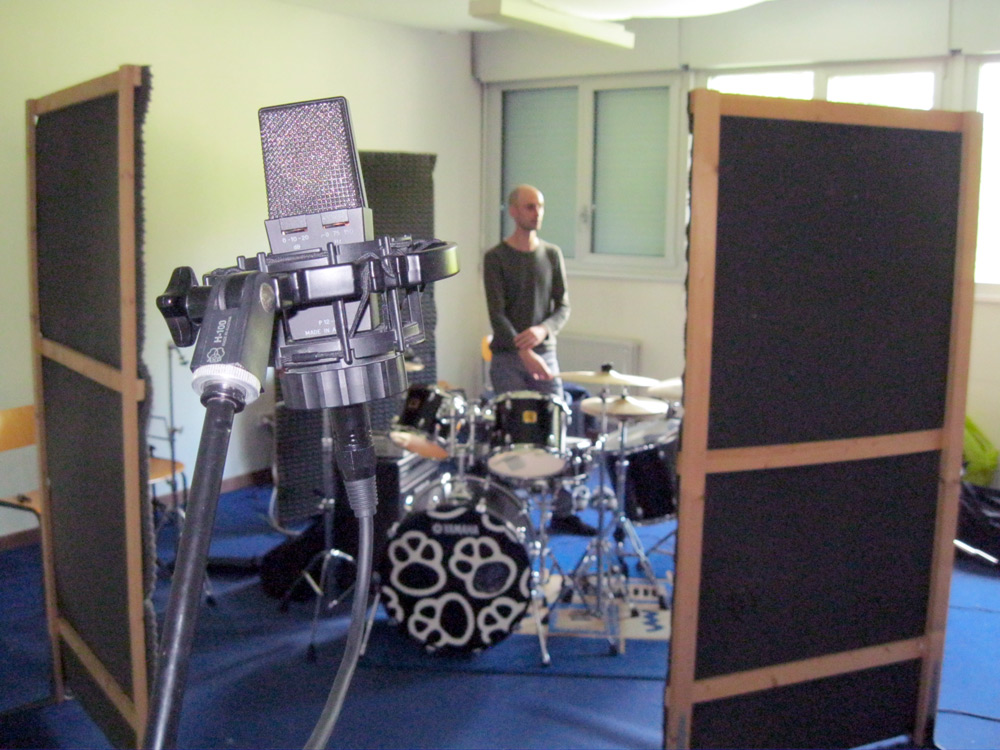 Here you can listen to the two clean recorded tracks with the Shure 55SH and the AKG 414. The third is a mixdown of the two mics, Shure on the center AKG panned to the left, with some equalization (on the Shure: cut at 360Hz to improve the snare sound that sounded a bit flat, emphasis on highs to make the cymbals shine and on lows at 60Hz to give the kick more prominence; on the AKG: radical high-pass filter) and compression (Shure). The drum bus has been processed with a loudness maximizer and rendered as a stereo track. 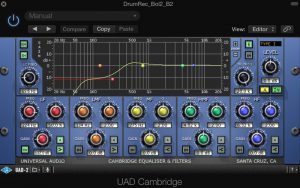 This is the outcome so far. I’ll post an update as soon as we have recorded the other instruments, in order to place the drum sound into perspective.